I was born in Barcelona, Spain, in the year 1971. I am the oldest and only boy of a family of five who grew up together with two younger sisters. In the year 1992, after finishing my graduate studies in Philosophy and Education at the University of Barcelona, I went to Kenya, Africa, to work as a lay missionary for three (3) years, helping with some human relief projects.

After several years of discernment and consultation with friends and missionary priests, I answered God’s call to become a priest and serve the people of God wherever God would send me. Therefore, I came to study theology at Saint Francis Seminary in Milwaukee, WI, in the year 1996. After five (5) years of theology studies, I was ordained a priest for the Archdiocese of Milwaukee in 2001.

After ordination I was appointed associate pastor for two (2) years at St. Mary’s in Kenosha, WI, and thereafter I was assigned as administrator of the bilingual parish of St. Patrick’s in Racine, WI. In 2004 I was requested to work as a missionary priest in the sister Archdiocesan parish called La Sagrada Familia (Holy Family) in the Dominican Republic where I ministered for six (6) years. In 2011, I returned to the Archdiocese of Milwaukee and I was appointed the associate pastor of St. Andrew’s in Delavan, WI, and St. Patrick’s in Elkhorn, WI. In the year 2012, I was named pastor of St. Patrick Parish in Elkhorn. And in the year 2018, I was appointed shared pastor of St. Andrew in Delavan and St. Patrick in Elkhorn for six (6) years.

Some of my interests outside the parish include reading historical novels and watching all kind of movies, listening to music and playing guitar, traveling, hiking and scuba dividing. I also like seafood and Italian cuisine. 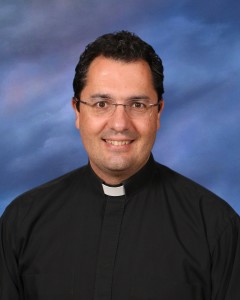